What is Culture Shock?

The first time I lived abroad, in Argentina, I wrote an excited letter to an old friend. “I am living in a place that is very similar to the States in most ways,” I told him, “and yet everything in daily life takes place in Spanish. More amazing altogether: while there are tons of things I don’t understand, I am able to function very well.”

He complimented me on my Spanish, but he also issued me a caution: “You are only halfway there.” When you first arrive, he said, people appear to be so very different. And when you pass the first barrier, they seem to be just like you. But there is another barrier, past which you become aware once more of how really different they are.

And at that point, he wrote, “you will both love them and want desperately to go home.” 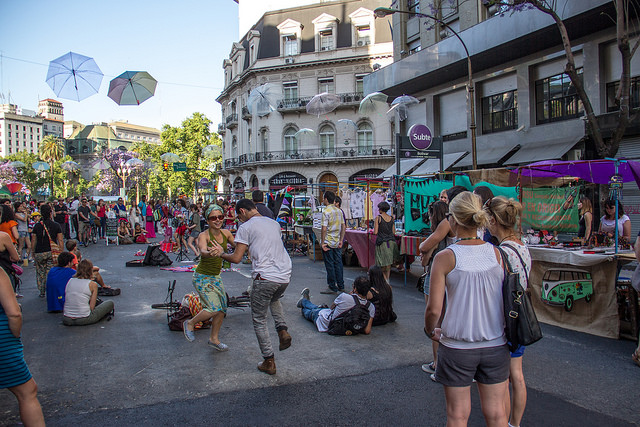 Street Scene in Buenos Aires, Argentina by CucombreLibre is licensed under CC BY 2.0

The term “culture shock” refers to the disorientation, confusion, and uncertainty that people experience in an unfamiliar cultural environment. Many people also feel anxiety and even fear.

It’s common to experience four stages of culture shock. Early on, many people experience an infatuation with their new surroundings, as I did. As the newness wears off, people often pass into a second phase of disillusionment, where they are critical of seemingly minor details. The third phase is a comfortable one; visitors may not like everything about their new surroundings, but they understand how to function and generally enjoy the experience. And the fourth stage is what’s known as “reverse culture shock” — people become so accustomed to their new environment that upon returning home, things are no longer as they expect.

Just as you may experience culture shock outside your home country, it’s important to remember that foreigners will experience it in your country. What seems perfectly normal to you can be a source of significant culture shock for others. For example, visitors to the U.S. often find the following things surprising:

Unfortunately, there’s no quick fix for culture shock. Preparation can help to lessen it, and some personality types may be more vulnerable to it than others, but it’s really always a matter of time. The longer you spend in a new environment, and the more you interact with people from that background, the easier it will get. Being open-minded, and flexible can also ease the transition, as can regular self-reflection.