When my friends in Mexico migrate within the country, they always go to places where they have family or townspeople. Even if they’ve heard that jobs are more plentiful elsewhere, it’s better to have a network. The community can get you a job, they tell me.

If you’ve spent time abroad — or even if different regions of the U.S. — you know that cultures can differ in all kinds of ways. Every place has its family structures, its foods, its ideas about which jobs are valuable and what a house looks like. There’s a lot of value in describing the particulars of any given culture, but there are also good reasons to think about the differences between cultures using more widely applicable frameworks.

One of these is the spectrum from individualism to collectivism, which has to do with the role of individuals in wider society.

In societies that lean toward collectivism, more focus is put on the group. In fact, one’s identity is, in large part, a function of one’s membership and role within the group. People are defined by relationships rather than accomplishments. Importantly, the survival, success, and well-being of the group is the main priority, as it ensures the well-being of everyone included in the group. As a result, harmony, consideration of others, and interdependence are highly valued. Many societies in Africa, Asia, and the Middle East lean more toward collectivism.

I mentioned before that the community has some obligation to help members find a job. For individualists, preferential hiring is judged harshly, seen as nepotism. But collectivists see it as intrinsically moral. Not only that, it’s smart business: you know the person you’re dealing with, which is less risky.

Collectivism is also reflected in the workplace in another way: achievement is often secondary to group cohesion. In more collectivist workplaces, people spend more time on small talk and rapport-building. Decision-making processes typically encourage group cohesion as well. Collectivists typically find it inappropriate to say “no” directly since it would challenge the harmony within the group, and negative opinions must be communicated indirectly. Meanwhile, individualists typically prefer to resolve conflicts by directly addressing the problem, while collectivist solutions are more roundabout.

More than a year after I began my research, a friend called me after her son was deported from the U.S. Since I had papers and could cross freely, she asked, could I get his car from Washington State to Southern Mexico? I couldn’t help — I explained the distance (3,000 miles), the costs (all that gasoline, a plane ticket, lodging and food during the drive, almost two weeks of lost working time), and the logistics (a non-citizen who enters Mexico in possession of a vehicle cannot leave the country without that vehicle under any circumstances).

The favor was impossibly large, but I still hated to disappoint my friend. After all, the community is obligated to provide for its own — and her asking meant that I had been accepted into the community at last.

How to Use Artificial Intelligence to Help Learners Recover Lost Ground Due to COVID-19
Although students are returning to class, the impact of COVID-19 on teachers and students is still being felt. According to UNESCO, 875 million students worldwide, 50% of the total, are...

How Artificial Intelligence Meets the Challenges of Hybrid Learning under COVID-19
COVID-19 is forcing schools around the world to rethink how they deliver instruction, and implement hybrid learning models. Students must maintain social distancing from each other, which limits the number... 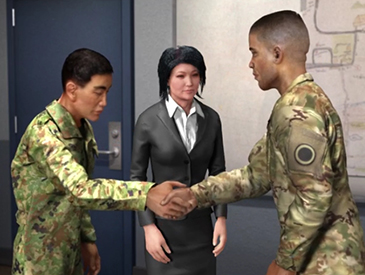 Alelo-Developed Culture Courses are Now Mandatory for U.S. Personnel Deployments to 86 Countries
Before U.S. military personnel report for overseas deployments, they must complete required training on various topics, including operational security and injury prevention. Cultural awareness training courses sponsored by the Defense...
We use cookies to ensure that we give you the best experience on our website. If you continue to use this site we will assume that you are happy with it.Ok